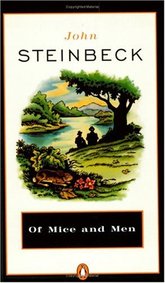 Source: Google Images
In the novel "Of Mice and Men," John Steinbeck describes an extremely difficult and painful for Americans period, which was the great migration of the thirties of the twentieth century, when hundreds of thousands of people migrated from coast to coast in search of jobs. "Of Mice and Men" is primarily a story about friendship. A sincere friendship.  And also about the power of dreams that so often direct our whole life. George Milton and Lennie Small, two employees, search across the country from state to state in search of any of the seasons. From the thousands like them the homeless vagrants their only difference is that they always travel together. They also have common hopes and dreams. Although the complete opposite of each other are, on the other hand complement each other. The huge and extremely powerful Lennie is also a intellectually disabled child who can not focus his attention on anything.  Much smaller and soberly looking at life George tries to protect Lennie out of trouble, which is constantly drawn in by his carefree behavior.  The constant requests Lennie about their common dream of their own farm. So far, however, the farm remains a dream. A dream like an American dream. Upon arrival at the farm they receive another job. The boss warns the employees to watch out for the owner's son, Curley. This arrogant amateur boxer is fiercely jealous of his young wife.

George becomes friends with the old black man who, in return for accepting it under the common roof has postponed his lifelong owned money. It's not much, but George's and Lennie dream of purchasing their own farm becomes real at last. However, the trouble begins. First Curley throws punches at Lennie. Then comes the worst. When Curley's wife inadvertently starts flirting with Lennie, Lennie starts strangling Curley's wife, eventually killed her by breaking her neck. George tells Lennie to run away and hide in a place where they camped the night before arriving at the farm, so that he could find him later. Curley finds the body of his wife and is furious. Curley tells all workers to grab a gun and they all set out to find Lennie. George realizes  that they are outnumbered. George decides to help Lennie for the last time. George takes the employees revolver, finds Lennie and turning his attention to the story of a farm dreamed by him ends his life with a  shot in the head, thus destroying their own dreams and hopes for a normal life. It is true that you can read it in one evening, but the memory remains for a long time.
Inspired by: http://www.englishforums.com/English/OfMiceShortSummaryAnyoneCorrect-Little/pwcbz/post.htm
Powered by