- A theme is the central idea or ideas explored by a literary work.

The nature of human existence 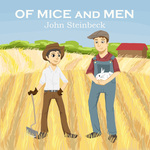 Source: Google Images
Many of the characters presented in John Steinbeck's novel, Of Mice and Men are people who at often time have a sense of loneliness and isolation. Although many of them are helpless and weak, they do not try to help the weaker, but bring them down even lower. At one point in the novel when Lennie goes to talk to Crooks, Crooks admits to his flaws -being a black man with a crooked back - yet just moments later criticizes Lennie's dream of the farm and his dependence on George.

The impossibility of an American dream 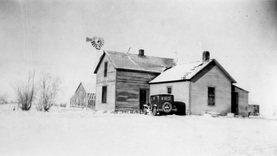 Source: Google Images
Many of the characters admit at one point that they wish they were living a better life. Curley's wife admits that she is not living in a happy and successful marriage. She also admits to wanting to be a movie star. All these characters have their own dreams, yet their lives will not change, because they are stuck in the life that they are stuck in and will not be able to get out. Just like the main characters of the novel.

George and Lennie like many people at the time have a dream of getting a farm. They gather the money for it, when other people from the farm find out about George's and Lennie's plans for the future. They have been preparing for this farm for a very long time. They both have been working very hard to get the money to buy the farm of their dreams. 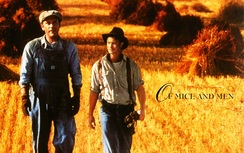 Source: Google Images
Most of the characters admit to loneliness. George begins these confessions when he reminds Lennie that the life of a ranch-hand is among the loneliest of lives. Men like George rarely have anyone to look to for companionship and protection, because of the often movement from farm to farm. As the novel progresses  more and more characters admit to being lonely. The fact that these people who barely know eachother  go as far as admitting to being lonely shows their desperation. Each of these characters begins searching for a friend, someone to help them measure the world, as Crooks says. For George, the hope of such friendship dies when Lennie does, and like he thought he would he goes through life alone. 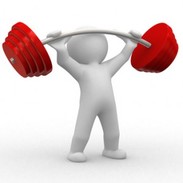 Source: Google Images
Throughout the novel we get to experience different types and levels of strength. The first strength John Steinbeck shows is the physical strength. Throughout the beginning of the novel, we see how Lennie is so strong that he is not able to control it. In the case of George and Lennie the physical strength that they both possess  is extremely important. If they get hired or not depends on how strong physically they really are. The main leader of the ranch and the bad-boy  is Curley who quickly makes this reality when he intimidates the people that surround him.

The physical strength is not the only strength that is needed on the ranch. At multiple points in the novel, it is evident that also the mental strength is required to survive. It is ultimately, not Curley, that defeats George and Lennie but the human nature

Symbols in the novel

Source: Google Images
It is a powerful symbol, one of the most powerful, if not the most powerful symbol in the whole novel. This farm is really what gets the reader into the novel. Just the thought of being able to roam free on your own land. A symbol of what the American dream was back in the 1930's. Those few acres, which seem to be able to change the lives of so many people. This farm would be a place that George and Lennie could finally call home. Many other characters in the novel also seem to be seduced by this thought of a farm, that Candy is ready to give up the money he had earned with such hard work. Lennie and George even invite Crooks to go with them as he wants to hoe their garden. It is like a safe haven for those who have experienced so much throughout their lives.

Source: Google Images
All novels have that one things that everyone always memorizes. This novel is no different. Everyone is able to experience the story of Lennie, a man who can't control his strength. We can never forget for when he always asks George, "Can we tend the wabbits, George". The rabbits are a symbol of the strong defeating the weak. From the firsts moments of the novel, we learn about how strong Lennie really is. We learn for how hard it is for him to control his own strength.


We get an insight from the very beginning that Lennie has an obsession with mice. He has received multiple mice from his aunt while she was still alive. Lennie would receive most of these mice but after a few days he would end up killing them.
Find out about more themes, motifs and symbols at: http://www.universalteacher.org.uk/prose/ofmiceandmen.htm
Inspired by: http://www.sparknotes.com/lit/micemen/themes.html
Powered by