Of Mice and Men Media Product

About The Author (John Steinbeck) 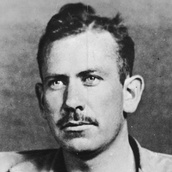 Source: Google Images
John Steinbeck (born February 27th, 1902 in Salinas; died December 20th, 1968 in New York) is  an American writer and journalist, winner of the Nobel Prize in Literature in 1962, the only son of an accountant John Ernst Steinbeck Sr. and teacher Olivia Hamilton.

He attended Stanford University between 1919 and 1925, but never obtained a degree. He had many odd jobs including being a painter, carpenter or worker on the ranch. Associating himself with the working class and his attachment to the native California shaped the distinctive tone of his novels.


It was not until the fourth book Tortilla Flat published in 1935, that brought him fame and recognition. Then there is the In Dubious Battle in 1936 - a novel about Californian fruit gatherers, Of Mice and Men in 1937 and a collection of short stories in 1938. The most famous of his novels during this period, however, will be the novel The Grapes of Wrath in 1939, grim but a moving story about moving Oklahoma farmers during the Great Depression. Steinbeck's later works were not as widely praised. He decided to broaden his horizons. When he returned to his former subjects in the coastal street, critics noted author's skills decline.

In 1962, John Steinbeck received the Nobel Prize for Literature. But it was an unfortunate event because it awakened the say of critics. Steinbeck's works were popular among the majority of readers in both England and America, but among scientists, academics and intellectuals he did not have such a good reputation. Critics emphasized sentimentality and very easy to perceive social problems by Steinbeck, and the lack of sophisticated language.


All the books that Steinbeck wrote:
List of books comes from: http://www.mchsmuseum.com/steinbeckbooks.html
Learn more about John Steinbeck at: http://www.nobelprize.org/nobel_prizes/literature/laureates/1962/steinbeck-bio.html